Women Who Brunch In Conversation March 2019.

The WWB-In conversation started at 6pm with a welcome speech from Chantal Edie on behave of her partners Belle beryl and Comfort Baiye and thereafter a self-presentation of each woman in the group. We also received a warm welcome from Alex Quest-JJQUEST, our host who mentioned he is the man he is today because of the strong women who raised him in his family. The following Ladies present had a lot to say on the IWD March 2019 theme #BalanceForBetter.

Harriet Muchu blessed us with a heavenly prayer eventually opening up the brunch elaborately placed on the table by JJQuest.
We started off with the question of what is a balance for better and how can we achieve this balance in our communities.
The ladies took their sits, sipped on their delicious cocktails and shared their convictions around what gender equality meant at home- the relation between a man and a woman. Some thought women had as many rights in a home as men to make decisions, others thought a submissive woman would garner the respect she wants from her husband just by being submissive. Others thought that a woman had to be able to work and take care of herself to be on equal standard as men in society. They most thought a woman that can take care of her needs will have her man respect her in their home. Others thought there shouldn't be a criterion for a woman to be acknowledged as equal to a man.

The next topic for the balance was the workplace. Yefon narrated to us her experience being the only girl in a technical workforce and how she uses her experience to encourage younger girls to go into STEM –Science and technology, engineering and mathematics. She said the gap was too wide between men and women in Stem jobs and there was a dire need for a balance in that domain. She did her best to prompt girls into that domain, so as to create fairness in the job market in technical practices.

Other women followed up by narrating to us their experiences as entrepreneurs in a male-dominated society. Tessy who is a film director told us the difficulties she faces being a woman in this field that is predominantly male. Doreen Fonju, Producer|Director of Calix d'Or Films emphasized the importance of teaching our girl children to be confident. She narrated to us how her father brought her up to believe she was equal to any man and can do anything. She said this has boosted her career because there is nothing anyone can tell her she cannot do.

Harriet Muchu MD of MWDB -on what women do to merge their work life and taking care of their families. She told us that at one point every woman would go through such a dilemma especially after childbirth. At times the workload may be too gruesome that you have to choose between staying at home and going to work. She personally took a decision to stay at home for 2 years to take care of her baby who is now 4years old. She took the decision to go back to work when the hysteria of staying too long from work began to stress her up to the extent of stressing her children. It was a very relatable story as most of the ladies saw themselves in her position.

Adeline Sede, Ceo of FabAfriq told us her arrangement with her husband a stay at home working dad while she was the go away working mum. Her husband's support of her career has made her the powerful woman she is today. Belle Beryl juxtaposed with her experience of being a Mumpreneur. She told us how she is balancing being the woman and head of the house as she rightfully puts it- women are the ones who run the home and should be identified as the head of the house. "I know my husband is regarded as the head of the home but in truth, I am the one running the home and making key decisions on what and where..." She urged women to understand their strength in society.

Suzzan, a prominent cake maker and businesswoman, on her part says, she grew up in a home where women were taught to be submissive. She has found a way to balance this through her business which gives her the financial power to take care of herself and gain the respect she deserves. Furthermore, she is in a relationship with a man who respects her as an equal giving her the stability she needs to flourish and glow.

Flore is the owner of a restaurant and she believes that women who respect their husbands, in turn, are respected. She believes it is vice versa. She believes she is happy in her home and business because she taught her husband to respect her by showing the example.
Therese had to leave her job to take care of her child who had learning disability, something she loves to do but at the long is taking a toll on her own personal fulfillment. As per normal in our society, the man had to continue working while the mother nature took care of the baby, especially as her husband had the better-paid job. She thinks the only way to balance this is to start a business or get another job moreover as their baby is already 3 years old and more independent.

Julie recounted to us her experience as a female tour guard. She explained how the job has empowered her and closed the gap she felt before between herself and men in her community. She is proud to say what a man can do, a woman can do it better. She is encouraging other women to break the gender barriers institutionalized by society and do what ever our hearts desire.

We ended the discussion with Adeline and the rest of the women encouraging every other woman to do their bit to change the narrative, Adeline spoke of her corporate women in leadership which is a platform she uses to encourage and promote women as bosses, she also made mention of Chantal Edies African woman in photography which showcases the work of African female photographers. Every other woman accepted that it was important to raise the men we wanted to see tomorrow with our daughters. Gender equality starts with the cradle. Just when we thought it was over maître Moudeki came in and gave us a lecture on what the common law stipulated on topics of rape by one's husband and divorce occurring in a marriage. We were all shocked to be made aware that in a marriage a woman couldn't accuse her husband of raping her.
We shall follow up on this with maître Moudeki on another session of WWB- In conversation.
Coming up soon.

On behave of Berylann, Comfort and myself, thank you, Ladies, for honoring our invitation to engage in this conversation to Balance for better. We shall continue to organize such meet-ups all year round in a guise to empower each other mentally and physically. We all agree that change starts with a conversation, don't we?

Special thanks go to @studioxldouala for photos and video
To @tong_G_D for face painting,
To Blueprints events for the Cake,
and to our host @JJQUEST. 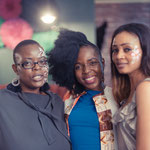 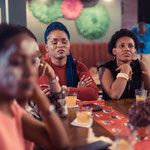 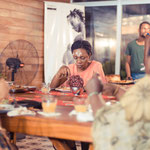 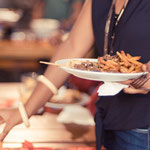 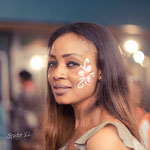 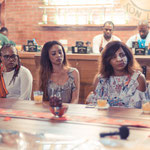 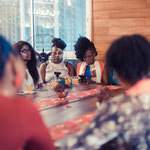 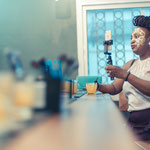 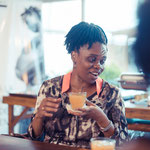 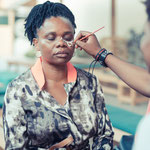 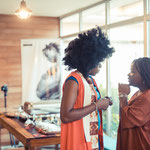 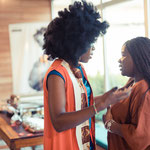 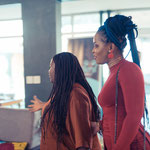 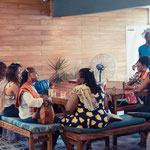 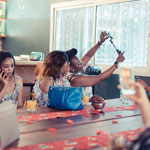 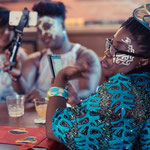 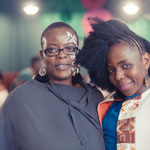 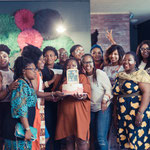 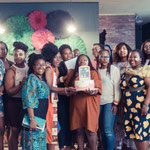